Piers Morgan’s outbursts about the Duchess of Sussex on Good Morning Britain have become Ofcom’s most complained about TV moments ever.

The presenter’s comments, made after Meghan and Harry’s bombshell-filled interview with Oprah Winfrey, have now seen more than 57,000 people – including Meghan herself – get in touch with the broadcasting watchdog, which is investigating.

In the explosive Oprah interview, which aired in the US on Sunday 7 March, Meghan said she had considered suicide during her time in the Royal Family as she felt like she “didn’t want to be alive anymore”. On GMB the following day, Morgan said he “didn’t believe a word” of it.

Ofcom released the updated figure in its weekly report on Wednesday. The number of complaints now stands at 57,121, surpassing the 44,500 regarding Bollywood star Shilpa Shetty’s treatment by Jade Goody and Danielle Lloyd on Celebrity Big Brother in 2007, previously the regulator’s most complained about incident of all time.

An Ofcom spokesperson said: “We can confirm that this issue has attracted the highest number of complaints since our reporting began.”

The investigation into the issue is ongoing, the spokesperson said.

On the evening of Tuesday 9 March, after the watchdog’s announcement of an investigation and criticism from mental health charities, including Mind, ITV announced that Morgan – who has said he is standing by his comments – would be leaving GMB.

Speaking outside his home the following morning, Morgan said of Meghan: “I don’t believe almost anything that comes out of her mouth and I think the damage she’s done to the British monarchy and to the Queen at a time when Prince Philip is lying in hospital is enormous and frankly contemptible.

“If I have to fall on my sword for expressing an honestly held opinion about Meghan Markle and that diatribe of bilge that she came out with in that interview, so be it.” 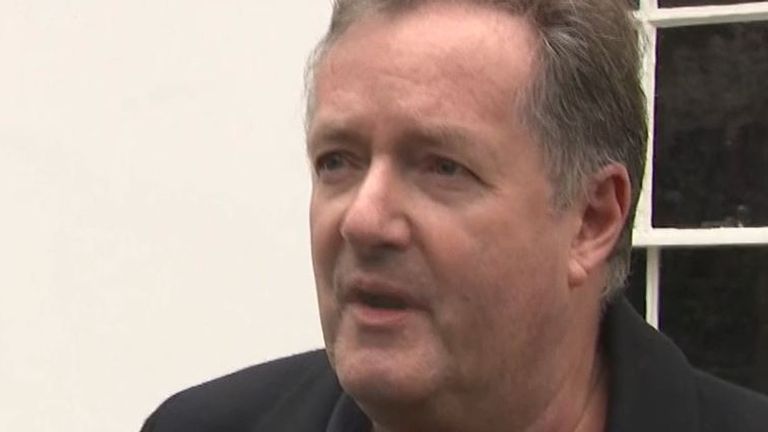 Morgan’s departure from GMB came after he stormed off the set of the show following a heated discussion with colleague Alex Beresford, who criticised him for “continuing to trash” the duchess.

In the first show following his departure, his former co-host Susanna Reid addressed the issue, saying: “It is certainly going to be very different but shows go on and so on we go.”

She described Morgan as “without doubt an outspoken, challenging, opinionated, disruptive broadcaster” with “many critics” and “many fans”.

On Morgan’s comments saying he did not believe Meghan, she said: “I completely believe what [Meghan] said. It’s important everyone does.”

Meghan and Harry also made other bombshell claims during the interview, most notably that a fellow royal had “several conversations” with Harry and raised “concerns” about son Archie’s skin colour before he was born, and “what that would mean or look like”.

Buckingham Palace issued a statement in response, saying race issues the interview brought up are “concerning” and “will be addressed”.

The statement on behalf of the Queen said: “The whole family is saddened to learn the full extent of how challenging the last few years have been for Harry and Meghan.

“The issues raised, particularly that of race, are concerning. Whilst some recollections may vary, they are taken very seriously and will be addressed by the family privately.

“Harry, Meghan and Archie will always be much loved family members.”