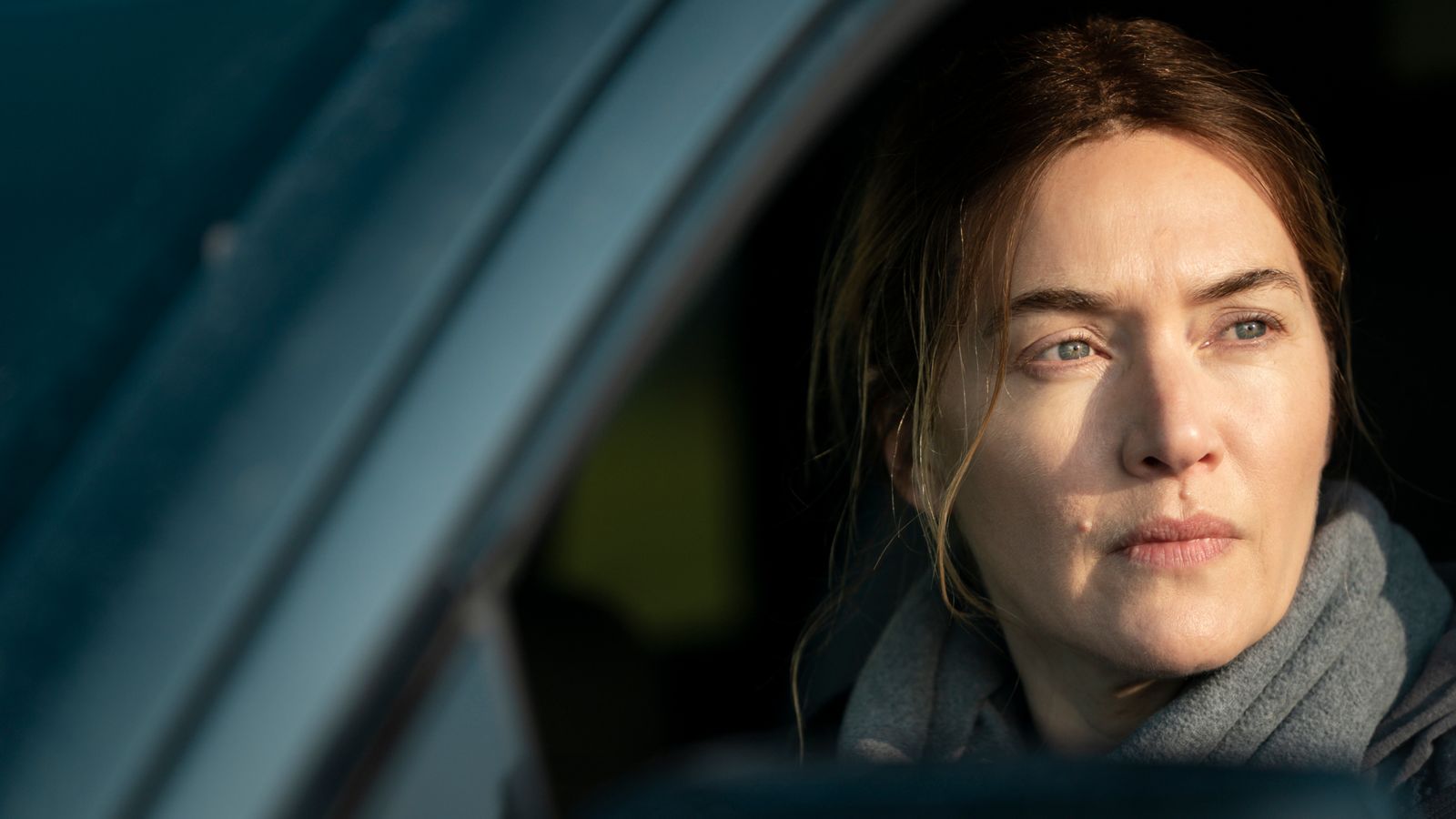 A decade after her last TV role, Kate Winslet is returning to the small screen as the star and executive producer of new drama Mare Of Easttown.

In the series, Winslet plays Mare Sheehan, a small-town Pennsylvania detective investigating a local murder at a time when her own life is falling apart following her son’s suicide, and she starts to become obsessed with various cases of missing and murdered girls.

With a brittle personality, long-term leg injury and a very specific Delaware County accent, the small-town American detective Mare is a world away from the period dramas that helped launch the Oscar-winning actress’s career.

In a UK broadcast exclusive interview, the star told Sky News that it’s the most challenging part she has ever played.

“I started preparing probably about five months before we were shooting and we started shooting in September of 2019 – I was 43 – and by the time we ended up wrapping in December, I turned 45, so I held this character inside of myself for all of that time,” she said.

“At the centre of that is this real gut-wrenching grief and crisis, personal crisis, that she is in, and creating that level of trauma and sustaining it was really extremely hard.

“And actually I found it quite hard unravelling myself from that… after all these years of doing this job you would think by now that I would have some decent systems in place to cope with those kind of emotional separations from a character back into my own life, but I have to say on this one, I just haven’t really been able to.”

Winslet starred in films including Sense And Sensibility and Hamlet in the mid-1990s, before soaring to fame thanks to Titanic, alongside Leonardo DiCaprio, in 1997. A varied mix of films followed, including Iris, The Life Of David Gale, Eternal Sunshine Of The Spotless Mind, Finding Neverland and The Holiday, before she won best actress at both the BAFTAs and the Oscars for her portrayal of a former Nazi camp guard in The Reader in 2009.

Her last TV role was in mini-series Mildred Pierce, playing the titular character, in 2011, before more films including Contagion, Steve Jobs and last year’s Ammonite. A seasoned Hollywood heavyweight, it’s hard to believe the star hasn’t had a producing credit before now. But she says it’s only after nearly three decades in the business that she’s felt ready.

“Producing is a really different job to acting, and there’s a reason why I’ve never done it before,” she said. “It’s because I wouldn’t have known how to, but after all of these years, you know, I have paid attention and I have learnt and it did feel like, yeah, I think I would know how to do this a bit now.”

And while Winslet’s work as an actor in the show is finished, the producing continues, and she has been heavily involved in the editing process, “tweaking things and taking things out and adding things back in again”, and preparing the show for audiences.

“I have just really loved it, being that entrenched in something,” she said. “It’s been fantastic, actually.”

The star says there was no one thing that drew her back to television after a 10-year break.

But, like many of us, she has missed human interaction during the last year, and says this new drama – which is ultimately about relationships – feels timely.

“I’m in my mid-40s now, I’ve been doing this job for 28 years and for me, more and more, the job that I do is about resonating with people and connecting with an audience. And I think this is a time when community is something that we all crave and wish that we had just at our fingertips, and I really felt that with this show.”

The small-town US crime drama is a genre that’s proved popular with audiences – with series such as Big Little Lies and Sharp Objects winning critical acclaim and big viewing figures.

So while it may have taken a decade for Kate Winslet to return to TV, for those who crave new shows with star power, it will have been worth the wait.

Mare Of Easttown starts on Sky Atlantic on 19 April