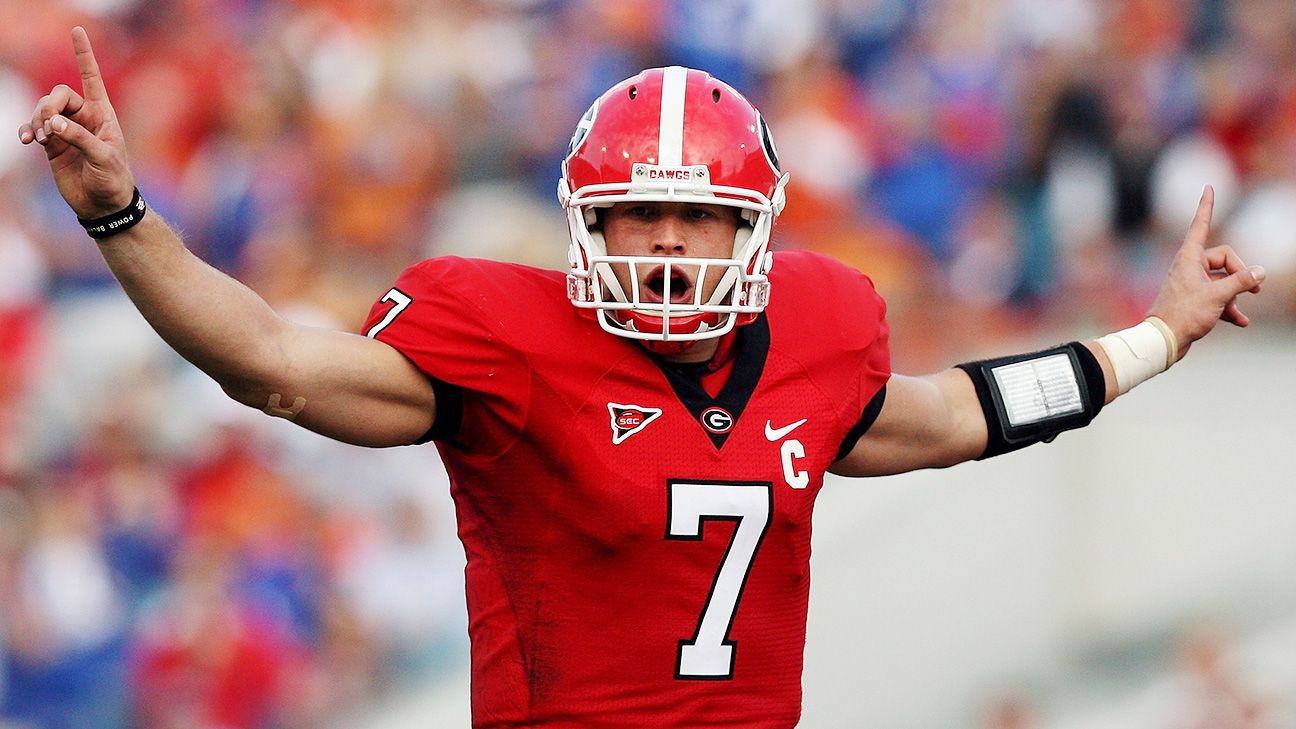 Trevor Lawrence is a lock to be the No. 1 selection in the 2021 NFL draft, and that projection has followed him since his freshman year of high school.

However, not all No. 1 picks have had that accurate of an NFL forecast. We talk often about the unknown variables when evaluating high school prospects off pure film and combine results. That inexact science comes to fruition when looking back on top selections.

With 2009 being our first draft class of the ESPN recruiting era, only three former No. 1 selections were ranked as five-star prospects, and just over half landed inside our ESPN 300 rankings.

Here is what former No. 1 draft prospects were like as high school prospects.

Nicknamed the Howitzer for his cannon of an arm, Stafford was (and still is) physically superior in terms of arm talent as any high school prospect over the past 15 years. However, in dissecting his college career, he probably should have had better results. A three-year starter, Stafford competed only 57% of his passes and threw double-digit interceptions in each season at Georgia.

Nevertheless, his physical attributes had NFL scouts drooling because he could do things with his arm that couldn’t be coached. Few players with his college production have gone No. 1 overall in the NFL draft. For 11 years, Stafford has been a steady, consistent performer and has done so without a lot of help around him in Detroit. His next chapter begins in 2021 as a member of the Los Angeles Rams.

Bradford was a lightly recruited in-state prospect for the Sooners, who believed they could develop and groom the former three-sport athlete (he also golfed and played basketball). Bradford redshirted as a freshman and would eventually become a three-year starter and 2008 Heisman Trophy winner before suffering a season-ending injury his junior season in 2009. He declared early for the draft having thrown for 88 touchdowns in three seasons.

Despite rehabbing a shoulder injury, he was drafted first overall and earned Rookie of the Year honors. Talent was never a question. When healthy, Bradford showed flashes of why he was so highly touted coming out of college. But he could never shake the injury bug, starting all 16 games in a season just twice in his nine-year career.

A journeyman player for the majority of his college career, Newton became the face of college football in 2010, leading Auburn to the BCS national title while securing the Heisman Trophy to complete his junior season. Newton started his career with much controversy as a Florida Gator with off-the-field issues that led to his transfer to Blinn College before finally signing with the Auburn Tigers in 2010. His junior season was one for the ages — 30 touchdown passes to just seven interceptions while also rushing for over 1,400 yards and 20 touchdowns.

Newton’s NFL career, for the most part, has been successful. He was named the NFL Offensive Rookie of the Year in 2011, NFL MVP and Offensive Player of the Year in 2015 and made one Super Bowl appearance. His past three seasons have been injury riddled, and that, paired with declining production, led to his release from the Carolina Panthers and eventual stint with the New England Patriots.

Looking back, Luck was intriguing because his mobility and speed were never really on display in high school to the level that we saw at Stanford (he ran a 4.67 40-yard dash at the NFL combine). He was well-groomed, but also was able to redshirt at Stanford, which helped his growth both mentally and physically. He transformed the Stanford program and engineered the most prolific career in program history.

As a redshirt freshman, he led the Cardinal to the Sun Bowl and followed that by finishing second in the Heisman voting in 2010 and 2011, when Stanford finished 12-1 and 11-2, respectively, and spent 24 weeks in the AP Top 10. He was the heir to Peyton Manning with the Indianapolis Colts, playing seven seasons before surprisingly retiring before the 2019 season amid injuries.

To no one’s surprise, this one came out of nowhere. Fisher was a 6-foot-6, 225-pound offensive tackle/defensive end who was underdeveloped and considered a late bloomer, which hampered his recruitment against the likes of prospects who were more physically developed at the same stage. He was first team all-MAC in his final year, but lightly regarded nationally.

He joined Joe Staley as the second Central Michigan alumni to go No. 1 overall in the NFL draft. His pre-draft measurables reflected his late-bloomer development, clocking a 5.05 40-yard at 6-foot-7, 306 pounds, at the combine. Fisher, for the most part, was as advertised for eight seasons with the Kansas City Chiefs, playing both right and left tackle. He tore his Achilles tendon before Super Bowl LV and was released last month.

Clowney was the rarest of rare physical prospects in high school — the best I’ve ever seen — and proved to be a disruptive force during his three years at South Carolina. As expected, he quickly contributed and was named SEC freshman of the year. By the time he left for the NFL after his junior season, he was a two-time first-team All-American and among the program’s all-time leaders in tackles for loss, sacks and forced fumbles.

However, there has always been one issue that has plagued Clowney at each level: consistent effort and performance. When he wanted to be, he was the best player on the field, and it was never even close, but when he took plays off, he would disappear, which hampered his ability to maximize his production and potential. After totaling 18.5 sacks in 2017 and 2018, he has recorded three in the past two years.

A two-sport athlete who also excelled in baseball, Winston was the top-rated quarterback in the 2012 class. During the evaluation process, two things stood out about Winston as a prospect. First: his obvious talent as a QB prospect, with his arm strength and mobility. That combination gave him the ability to improvise and create big plays. The other, which became evident during 2012 Under Armour All-America week, was that while he wasn’t a strong, consistent practice player, he had a knack for elevating his play in games.

In college, he continued to demonstrate that he could step up under the big lights. Winston lived up to his billing as the top quarterback prospect in his class, winning his first 26 games as a starter, leading the Seminoles to a national title in 2013 and winning the Heisman Trophy, among other accolades. While his time as a pro with the Tampa Bay Buccaneers and New Orleans Saints has been inconsistent, he still has the ability to showcase the talent that he showed when he was among the top prospects in his class.

The 2013 ESPN 300 QB class overall was a disappointment — just a handful of the 33 signal-callers in that group going on to realize their promise. Four of the top five went undrafted (the top QB, Christian Hackenberg, went in the second round). Two of the best from that class emerged from near the bottom in Ohio State’s J.T. Barrett (No. 262) and Goff, who not only met expectations, but rose to the top of that group.

A quick contributor at Cal, Goff became the first true freshman in school history to start the season opener under center and set several single-season passing records. Over the course of his career, he started 37 games and left with more than two dozen school records. As a prospect, Goff didn’t wow with his mobility among an emerging crop of dual-threat quarterbacks, but he impressed with his quick release, accuracy and touch on the deep ball.

With just a few offers, and interest limited to programs out West, Goff would prove worthy of more attention and a higher ranking, but he was still a talented prospect who impressed us and ranked among the best in his class. He helped lead the Rams to a Super Bowl appearance before he was traded to the Lions this offseason.

The line that can be drawn from college football recruit Garrett to No. 1 NFL draft pick Garrett is a straight line. Coming out in the 2014 class, it was clear he was one of the elite prospects in the nation, ranked first at the defensive end position. Even back in high school, he possessed an impressive blend of size, power and agility that allowed him to be a dominant force, which he would go on to be at Texas A&M as well.

What equally impressed about Garrett was that he was not just physically gifted, but he entered college as a sound football player with his technique and feel for the position. A disruptive defender, he led the Aggies in sacks and was named team defensive MVP his freshman season. With continued positive development as a college player, it really was no surprise this former five-star and Under Armour All-American wound up being selected first overall by the Cleveland Browns in the NFL draft just a few years later.

We’ll be the first to admit that recruiting is not an exact science, and Mayfield is a shining example. Not a highly touted prospect in his class, Mayfield was a three-star ranked within the top 70 at his position. While his ranking now appears shockingly low, it fit the consensus at the time.

This future Heisman winner and top NFL pick held just a few offers — none from Power 5 programs — leaving high school. A good player for Lake Travis High School, he was poised with good tools, but none that made him necessarily stand out. And height was a concern.

He ultimately walked on at Texas Tech, where he proved detractors wrong, making several starts and earning Big 12 Offensive Freshman of the Year honors. Mayfield transferred to Oklahoma and blossomed there, leading the Sooners to three straight conference titles, setting several school and conference records and departing college with over 14,000 yards passing. As history has shown, Mayfield has proved skeptics wrong and made it clear he was one of the top prospects in class.

Initially, size was a concern for the 5-foot-11 Murray, and early rankings for the 2015 class put Murray lower in the pack. But as the evaluation process unfolded, the focus shifted to his many strengths. He went undefeated as a starter for Allen High School in Texas, and he is dynamic enough to be a threat as a runner and a talented passer with a smooth, quick release and impressive accuracy.

A high-level two-sport athlete, Murray was named an Under Armour All-American in both football and baseball, finishing the 2015 cycle as the top-rated quarterback in his recruiting class. He signed with Texas A&M and contributed as a freshman, but transferred the next year to Oklahoma, where he initially sat behind Mayfield and then demonstrated why he was so highly ranked coming out of high school, earning the Heisman Trophy in 2018. Murray was also a first-round pick in the 2018 MLB draft, but has gone on to have success under center with the Arizona Cardinals.

Burrow’s final season at LSU was a terrific one, leading the Tigers to a national title, setting several school and NCAA single-season passing records and winning the Heisman. While the argument can certainly be made that he exceeded expectations, the leap from four-star prospect to No. 1 overall pick was not a big one; it just took some time.

Ranked inside the ESPN 300, he was ranked in the top 10 at his position and was selected to the national Semper Fi All-America game. Though he wasn’t among the five-stars, he definitely had established himself as one of the top QB prospects in the 2015 class. An instinctive player with a live arm and good mobility, Burrow was a prospect who showed improvement each year from his sophomore to senior seasons.

Once in college, he had to wait for his opportunity, sitting behind ESPN 300 QBs J.T. Barrett and Dwayne Haskins at Ohio State. He transferred to LSU, and after settling in, he ultimately took his game to the next level and became the top prospect in last year’s draft.