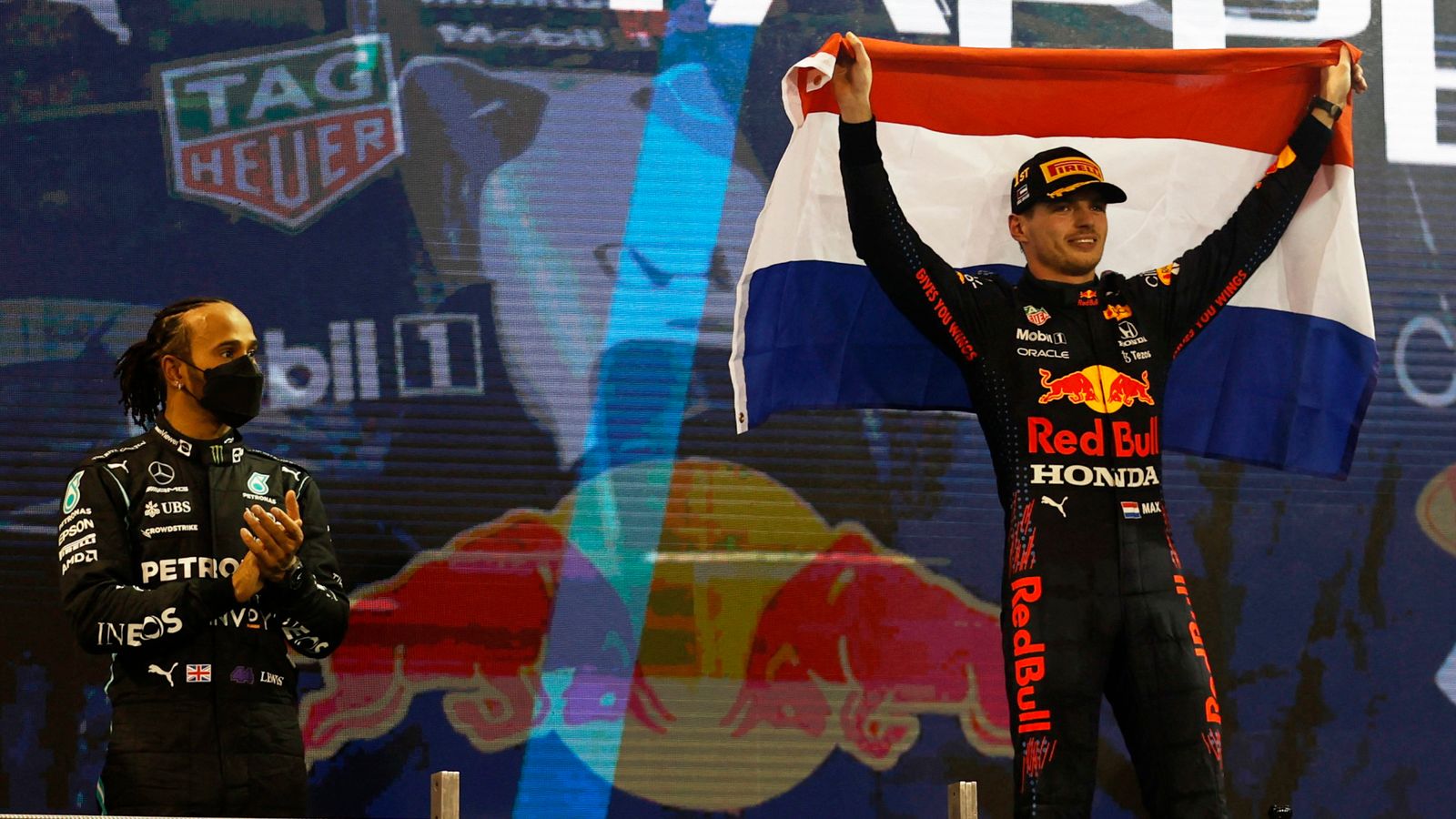 Sir Lewis Hamilton has failed in his bid to win a record eighth F1 world title after a last-lap drama in the Abu Dhabi Grand Prix.

After leading for almost all of the race, the 36-year-old British driver was overtaken on the final lap by championship rival Max Verstappen in controversial circumstances.

Reacting to his championship victory, Verstappen, 24, called it “unbelievable” and “insane”.

He added: “Finally a bit of luck for me. It was great teamwork.

“My team know that I love them and there’s no need to change ever. I want to stay with them for the rest of my life.”

Mercedes driver Hamilton looked on course for his eighth world title, but after a safety car came on the track to deal with a Nicholas Latifi crash towards the end, Verstappen lying in second was given a reprieve.

More on Formula One

The Dutchman changed his tyres during the delay and, after lapped cars were allowed to clear the safety car, he and leader Hamilton had a final-lap race in which Verstappen prevailed after overtaking Hamilton going into turn five and holding him off to the chequered flag.

Hamilton said: “Firstly congratulations to Max and to his team. I think we did an amazing job this year. My team, everyone back at the factory, have worked so hard this whole year, it’s been the most difficult of seasons.

“I’m so proud of them and I’m so grateful to be a part of the journey with them.

“This last part of the season we gave it absolutely everything and we never gave up.”

With around 10 laps to go, the Red Bull team principal Christian Horner said over the radio that they needed a miracle to stand a chance of catching Sir Lewis Hamilton’s Mercedes.

All season, Max Verstappen has gone for opportunities when he has seen them and in overtaking Hamilton in the last seconds of the final race of the season he pulled off his most momentous move.

The 24-year-old comes from a motorsport-obsessed family. His dad Jos raced 107 times in Formula 1 but never won a race, and his mother Sophie Kumpen raced at a high level in karting in the 1990s, often beating male drivers who went on to have F1 careers.

As a young boy, Max wouldn’t accept waiting until he was six years old for his first go-kart. His parents had the contacts and the insight but their boy had the talent.

He has pushed boundaries throughout this season but the risks have been rewarded with his first-ever world championship.

Denying Sir Lewis Hamilton a record-breaking eighth title is a big deal, but Max Verstappen has one of his own – he’s an F1 prodigy who is only just getting started.

The pair head into the final race of the year level on points with 369.5 each and were on the front row at the Yas Marina Circuit with Verstappen on pole.

But Hamilton was quicker off the line and led into turn one.

At turn seven, Verstappen lunged to try and regain his lead.

Hamilton went off the track as a result, rejoining having missed the turn but race officials deemed he had no penalty to answer for.

Following the near-miss, Hamilton scampered down the road and started to extend his lead but he did not have it all his own way during the race.

The Briton came into the pits on lap 15 to avoid being undercut by Verstappen but emerged behind the Red Bull of Sergio Perez – who was given instructions to hold up Hamilton.

The Mexican did just that, costing Hamilton over six seconds as the tussled for the lead, Verstappen closing in and praising his team-mate as a “legend” over the radio.

Hamilton won the Saudi Arabian Grand Prix last Sunday, tying with Verstappen in championship points for the season and setting up a title showdown in the final race of the season.